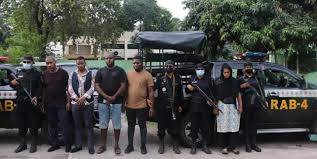 Sixty-six Nigerians are spending various terms in prisons in Bangladsh for fraud and other crimes, a report by the country’s top newspaper, Dhaka Tribune said.

The Nigerians make up majority of the 86 Africans jailed across the country.

The other 20 prisoners are from Cameroon, Tanzania, Ghana, Algeria, Mali and Kenya.

There are 2927 people from 32 African countries now staying in Bangladesh.

Among them, 455 have already crossed their visa expiration dates.

Many Nigerians end up staying in Bangladesh past their visa expiration date due to the long visa renewal process.

There is no Nigerian embassy in Bangladesh, and visas have to be processed in New Delhi.

A total of 157 Africans are accused of fraud and some other charges, according to information from the Special Branch (SB) of police

The Dhaka Tribune said fraudsters from Nigeria have recruited Bangladeshi counterparts to join their crimes and have succeeded in scamming many victims.

Several fraudsters from Nigeria have been detained by Bangladeshi law enforcement agencies over the past year, leaving honest members of Bangladesh’s Nigerian community feeling ashamed.

Members of the Nigerian community said the parlous economic condition in Nigeria led many of their countrymen to turn to a life of crime, including fraud.

Nigerian fraudsters come to countries like Bangladesh, India, and Pakistan as they see them as lands of opportunity, and they bring disrepute on the entire community when they are caught.

Asking to remain anonymous, a Nigerian student in Bangladesh said: “There are good people and bad people in every country. Please do not judge us because of the misdeeds of these criminals [Nigerian fraudsters].”

In raids on August 6 and July 22 this year and July 4 last year, a total of 16 Nigerians and two of their Bangladeshi associates were detained by law enforcement agencies.

On October 23 this year, Nigerian Chukwuemeka Samuel was detained from Dhaka’s Khilket area for fraud.

Most of the fraudsters travelled to Bangladesh on business visas. Several Nigerian students are in the country on student and player visas, but there are no allegations of criminal activities against them.

The scams used by the caught Nigerian fraudsters differed in minor details but shared a similar structure.

The scammers would usually make first contact with potential victims through fake accounts on social media platforms or messenger services, such as Facebook or WhatsApp.

After gaining the victim’s trust, the scammers would offer them a sum of money as a gift or prize.

Chukwuemeka Samuel would claim to be Coca Cola representative Richard Phillip and told his victims they had received a cash prize.

Some of the fraudsters would contact their victims while posing as female American soldiers in Syria who wanted to give away their money.

When the victims came to collect the money, usually at Dhaka airport or Chittagong port, they would be met by the Bangladeshi associates of the Nigerian fraudsters.

The Bangladeshi fraudsters, posing as customs officials, would demand that the victim pay a 10% “customs tax” before collecting the money.

The fraudsters sometimes threatened to file embezzlement charges against the victim if they did not pay. After collecting the “tax” from the victim, the fraudsters would disappear without giving anything in turn.

One victim lost Tk2 crore in this manner, after being told she had won Tk20 crore at an online art competition.

The fraudsters had initially contacted her through email and asked her to submit a painting.

Nigerian Jacob Frank, who owns a restaurant opposite Jamuna Future Park in Dhaka and has been living in Bangladesh for many years.

He helped many fraudsters from Nigeria with their entry visas, according to the Criminal Investigation Department (CID) Organized Crime unit Additional Superintendent of Police Zakir Hossain.

Most of the fraudsters who have been detained gained visas by claiming they were travelling for garment business purposes, Zakir added.

“Among the culprits, most of them lived in the Basundhara and Pallabi areas. There is no evidence of any crime by Nigerian students or those who are here on player visas,” the CID official continued.

“First, there are a lot of uneducated people in Bangladesh and it is easy to cheat them, so they are easy targets.

“Second, there are quite a few people who are very greedy and the Nigerian fraudsters take advantage of this greed as well,” he said.