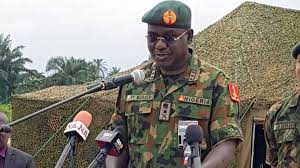 The Army Council has approved the promotion of its spokesman, Sagir Musa and 135 other senior officers with immediate effect.

The senior officers were promoted to the next ranks of Major General and Brigadier General respectively.

A statement issued by Musa, Army Spokesman, said a total of 39 Brigadier Generals were lucky to be meritoriously promoted to Major General, while 97 Colonels have also been elevated to Brigadier General accordingly.

The statement said the Chief of Army Staff, Lieutenant General Tukur Yusufu Buratai congratulated all the promoted officers and their families, and urged them to redouble their efforts to justify the confidence reposed in them.