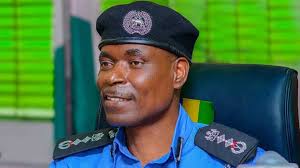 Men of the Nigerian police has been charged not to feel discouraged by the protests staged by Nigerian youth, calling for the end of its Special Anti-Robbery Squad, SARS.

The Inspector General of Police, IGP Muhammad Adamu Abubakar gave the charge during a visit to Ogun State police command, Eleweran in Abeokuta.

The police boss said all that happens during and after the protest is as a result of fake and bad news.

Abubakar, who had gone round the southwest, however, call on all police officers to come out fully to perform their duties because it is their constitutional responsibility.

He said, “Don’t be discouraged, come out in full, and perform your duties, nobody can do it, it is your constitutional responsibility and you must do it. No amount of intimidation can prevent us from doing our job.

“Nobody can demoralise us, nobody can prevent or make us shy away from performing our duties. The responsibility of protecting lives and property is given to the police and you are licensed to carry arms.

“We are encouraging you to go out there and perform your duties without fear or favour and without being afraid of any victimization. Be courageous, be civil and be calm and follow the procedures in performing your duties.

“You should not shy away from using your firearms for these purposes but don’t kill.

“If in the process of performing your duties, a mistake comes up, and we know that you followed all the necessary procedures, we shall be behind you, we shall support and make sure that you are not molested”

The State Commissioner of Police, CP Edward Awolowo Ajogun earlier in his welcome speech said the IGP’s visit would reawake the dampen morale of the police officers in the state.

Ajogun explained that about seven divisional headquarters were vandalized in the state with the DCO of Atan -Ota division, DSP Ogbeche losing his life.

According to him, the police in the state have returned to their respective duty posts since it is their duty to protect lives and property.

He promised that the command would remain loyal and more professional in its desire to serve the people of the state, thanking the IGP for elevating the junior ranks to their next levels.