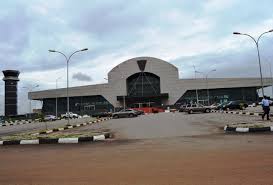 By Peter Usman
As preparation for this year’s December General Pilgrimage exercise to Israel Rome and Greece continues, the Nigeria Christian Pilgrim Commission, NCPC, has rated Asaba International Airport as one of the best after Lagos and Abuja.

The Executive Secretary of the Commission, Rev Yakubu Pam made the remark after the inspection tour on the facilities at the Airport.

Rev. Pam disclosed that. the Commission would be airlifting intending Pilgrims for the first time from Drive Ifeanyi Okowa for his developmental strides and for making sure that the facilities at the airport conform with global standards.

The Airport Manager, Mr Austine Ayemidejor, who conducted the Executive Secretary round all the major facilities at the airport, explained that the Airport had three boarding gates, two arrivals, one for local and the other for International passengers.

Ayemidejor intimated the NCPC helmsman that the critical facilities at the airport were duly certified by the Nigerian Civil Aviation Authority, NCAA in line with global best practices.

The Executive Secretary was also shown the three categories of the VIP lounge, arrival and departure halls, the control tower, which he said is being supervised by officials of the NCAA as well as officials of the Nigerian Metreological Agency, NIMET.

The Manager equally stated that the airport had done four international flights seamlessly, adding that all the COVID 19 protocols were being strictly followed to the latter to protect the passengers.

It would be recalled that the Commission commenced this year’s Airport inspection early in November and has so far inspected about eight international airports including Asaba which would be used for this year’s Pilgrimage operations.