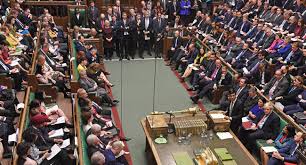 The parliament in the United Kingdom has voted for its government to begin consideration of sanctions to be brought against Nigerian officials involved in the use of deadly force against protesters decrying police brutality in October.

A petition signed by more than 220,000 people brought a motion before the house for a non-binding vote. State and federal reactions to demonstrations across major Nigerian cities last month were met with global condemnation.

The Members of Parliament (MPs) are calling for targeted punishments for officialdom in the West African nation that would not inconvenience the population at large. These will come after independent investigations have been carried by British authorities.

An incident on October 20 in Lekki, Lagos, in which Amnesty International reporters has claimed a number of lives were taken, was reportedly the main concern for many of the British MPs. Nigerian soldiers have been accused of opening fire on protesters in the early evening of that day.

Although amateur footages seem to suggest that indeed, protesters were in the line of fire, Nigeria’s army has denied that it was shooting live rounds at protesters.

Last week, the country’s Minister of Information and Culture, Lai Mohammed, called for CNN to be sanctioned for what he described as a reinforcement of “the disinformation that is going around” following CNN’s investigations which claimed that Nigerian protesters were shot at by security forces at the Lekki Toll Gate.

“Like everyone else, I watched the CNN report. I must tell you that it reinforces the disinformation that is going around, and it is blatantly irresponsible and apoor piece of journalistic work by a reputable international news organization,” the minister criticized.

But the news outlet said it was able to verify the authenticity of those footages with the help of professionals.

The report was based on testimony from dozens of witnesses, and photos and video obtained and geolocated by CNN. It painted a picture of how members of the Nigerian army and the police shot at the crowd, killing at least one person and wounding dozens more,” the report from CNN claimed.

Protests against police brutality in Nigeria, gathered momentum from social media via the hashtag #EndSARS, in mid-October. However, with time, the concerns of the protesters devolved into subjects of underdevelopment in Nigeria.