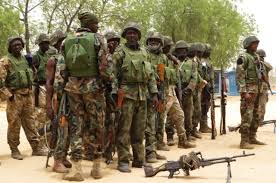 The Defence Headquarters says troops of Operation Accord have arrested 11 illegal miners and eliminated scores of bandits on Nov. 21 in parts of Zamfara and Katsina States.

The Coordinator, Defence Media Operations, Maj.-Gen. John Enenche, in a statement on Monday, said the troops continued to record successes in the fight against banditry and other criminal acts in the zone.

Enenche said the troops apprehended the illegal miners following credible intelligence on their activities at Kadauri in Maru Local Government Area of Zamfara.

He said that the troops also neutralised one bandit and arrested two in an encounter at Gidan Ruwa along Rukudawa axis of Zurmi Local Government Area of Zamfara on Sunday following distress call from locals.

He said that one AK 47 rifle and one magazine loaded with 29 rounds of 7.62mm special ammunition were recovered.

According to him, troops also on Sunday, arrested a suspected kidnap kingpin in Kurfi Local Government Area of Katsina State following credible intelligence.

“The suspect who has been on the wanted list is presently in custody for further action.

“The Armed Forces of Nigeria and other security agencies will not relent until all enemies of the Nation are neutralised and normalcy is restored to all troubled zones,” he said.