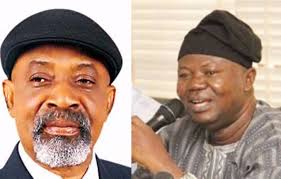 Minister of Labour and Employment, Chris Ngige, has said that he is also affected by the ongoing strike by members of Academic Staff Union of Universities, ASUU as three of his biological children who are undergraduates have also been staying at home.

Ngige said this to disprove the popular believe that the government has not been concerned about ending the eight-month ASUU strike because most of the children of the officials are private institutions in Nigeria or abroad.

The minister in an interview with Arise TV, said he had three biological children in public schools and not in private universities.

The minister further revealed that two of his children in Nigeria have dual nationality, American and Nigerian. However, he said he chose that they remained with him in Nigeria.

“So, when ASUU says politicians don’t care because they have taken their children abroad, Chris Ngige cares because my children are not abroad even though they have dual nationality – two of them have American citizenship; they can be in America, but I chose that they remained here with me.