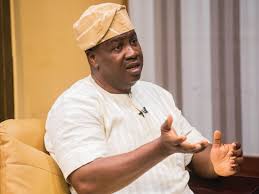 The Lagos State chapter of the All Progressives Congress, APC, has sued candidate of Peoples Democratic Party, PDP for the December 5 senatorial bye-election in Lagos East, Mr. Babatunde Gbadamosi.

The APC dragged him before a Federal High Court, Ikoyi for alleged perjury and falsification of certificates.

Counsel to Lagos APC, Mr. Kemi Pinheiro (SAN) of Pinheiro LP and Mr. Kemi Balogun (SAN) of Oluwakemi Balogun LP filed the suit at the court on Monday, asking it to disqualify Gbadamosi from contesting the bye-election.

The APC filed the suit against the PDP candidate and Independent National Electoral Commission (INEC) supported with documents to prove its case.

In the Suit NO: FHC/L/CS/1659/2020, the APC said it studied the West African Examinations Council (WAEC) certificate, which Gbadamosi submitted to the INEC in comparison with his certificate obtained from the official website of WAEC.

The party, in its writs of summons, claimed that it discovered certain discrepancies in the certificates, which according to the APC, were indicative of the fact that the WAEC certificate Gbadamosi submitted to the INEC might have been falsified.

“Also, the grades he claims to have received via the certificate is different from that contained on the official website of WAEC,” the APC declared in its writs of summon.

The WAEC certificate, which Gbadamosi submitted to the INEC, revealed that the PDP candidate only sat for five subjects: English Language with A3 grade, Literature in English C5; History C5; Commerce C4 and Biology P7.

However, details of Gbadamosi’s result obtained from WAEC’s official website revealed that the PDP candidate sat for eight subjects in which he had F-9 in Bible Knowledge; F-9 in Economics; F-9 in Mathematics; A-3 English Language; C-5 in Literature in English; C-5 in History; C-4 in Commerce and P-7 Biology.

The APC, also, alleged that the PDP candidate filled Form EC9 that he attended the Lagos State University after obtaining his WAEC certificate in 1985, which it argued, was suspicious because he did not meet requirements for admission in the university.

On these grounds, the APC asked the court to disqualify the PDP and Gbadamosi from contesting the forthcoming senatorial bye-election in Lagos East, which the INEC had rescheduled to hold on December 5

The party asked the court to disqualify Gbadamosi from contesting the December 5 senatorial bye-election in Lagos East, the APC prayed that the court, also, “disqualifies him from contesting future elections in view of the falsified certificate he presented to the INEC.”

It alleged that the PDP candidate made several false declarations on oath regarding his working experience, his educational qualifications and certain other aspects.

The APC further alleged that Gbadamosi did not participate in the one year mandatory National Youth Service, NYSC.

The APC said this indicated that making “false declarations on oath and failure to participate in the mandatory national service are offences under our several criminal laws.”