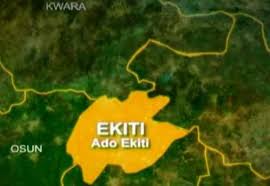 A policeman was reportedly shot dead on Friday in a bloody fracas that erupted between the policemen attached to the Area Command in Ado-Ekiti, the state capital.

The deceased police officer got trapped in the melee when some protesters were being chased out within the premises of the station.

An eyewitness told journalists in Ado Ekiti, on Saturday that some youths numbering about 20, had besieged the police Area Command office chanting war songs over the killing of a motorcyclist by a driver.

The policeman was reportedly shot in the course of the fracas that erupted while trying to scare away the violent protesters.

The youth were said to be expressing anger over the killing of one of them by the driver and alleged police seizure of the corpse and a sum of N470,000 paid to the family of the deceased by the car owner.

The deceased’s family had allegedly demanded the money to enable them to transport the corpse to their country home, for burial.

A source said: “When the police failed to release the corpse and money allegedly collected from the driver to the family of the deceased person, the relatives stormed the police station in protest and demanded that the corpse and the money should be released.

“Sensing that the protest was becoming violent, the police fired teargas canisters and gunshots to scare them. In the process, stray bullets hit a policeman in the leg, who later bled to death in the hospital.”

But the Police Public Rations Officer, Ekiti Command, ASP Sunday Abutu, said the police are still investigating who actually fired the shot that killed the policeman.

Abutu alleged that the investigation became expedient on the premise that the protesters came to the police station with dangerous weapons and that the gunshots came from different directions.

“But out of that money, it was agreed that a sum of N150,000 should be paid to the bike owner. It was this the protesters heard and stormed the police station in anger that our men were trying to cheat them. The owner of the motorcycle has not even been paid at all.

“As they were brandishing dangerous weapons and requesting that the detainee be released to them, the police fired teargas canisters to scare them. But to the police’s surprise, they saw that gunshots were coming from different directions and one of our men was hit in the process and died.

“It was hasty and wrong that it was the police that fired the shot that killed one of them. We are still investigating,” he said.