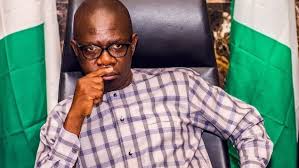 The former governor of Ekiti Ekiti State, Ayodele Fayose has ‎pleaded with the Ondo State Deputy Governor, Agboola Ajayi, and his cut-like supporters to return to the People’s Democratic Party.

Fayose, who described Ajayi as a force to reckon with in the politics of Ondo State, said he would thrive better politically in a mainstream and liberal political party like the PDP.

Agboola, who, in the build-up to the October governorship election in Ondo State, dumped the APC for the PDP and later abandoned the PDP for the Zenith Labour Party to contest the governorship had been a House of Representatives member under PDP.

The ex-governor who made the call when the deputy governor visited the former in his Afao-Ekiti country home late Friday night to celebrate with him on his 60th birthday.

In a statement issued by his media aide, Lere Olayinka, and made available to newsmen on Saturday, Fayose called on Agboola to return to the PDP and join hands with other leaders in Ondo to rebuild the party.

“It is important for him (Agboola Ajayi) to put the past behind, return to PDP and join hands with other leaders in the State to rebuild the party.”

“What I can tell you like a brother is that the past should be put behind you and the future should be focused on realistically.

“The best option before you now is to return to the PDP and I am encouraging you to give it a consideration because you need the party and the party too needs a strong political character like you,” Fayose said.

According to the statement, the deputy governor, in his remarks, commended Fayose for his “credible leadership in the southwest and the country as a whole”.