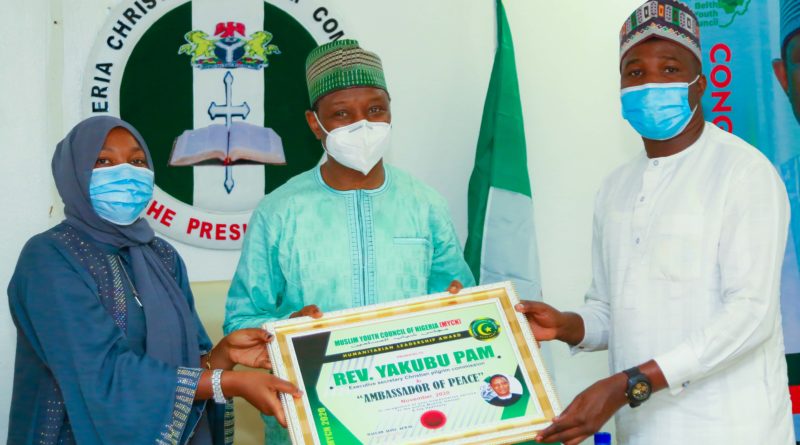 The Executive Secretary of the Nigeria Christian Pilgrim Commission, NCPC Rev Yakubu Pam has been honoured with an Ambassador of peace award by the Muslim Youth Council of Nigeria.

The award was bestowed on him by the President of the Council, Amb. Aliyu Auwal at the NCPC corporate headquarters in Abuja.

Rev. Pam thanked the Muslim Youth Council for considering him reserving of the award, saying that he was happy that the award was conceptualised by the youth who barely know much about him.

He assured them of his support and that he would be looking forward to working with them in the promotion of inter faith harmony.

The NCPC boss admonished them to continue to preach peace always.

Earlier, the Grand Khadi of the Muslim Youth Council, Comrade Adamu Matazu thanked the NCPC boss for the opportunity to meet with him.

Khadi therefore assured that their visit would go down in history with the Muslim Youth Council as a day they met with one of the Peace Generals of Nigeria.

He explained that the country has been divided into two with those who chose to proffer solutions to the problem of the society and others who chose to be part of the lamentation.

He reaffirmed that the Muslim Youth Council is using its platform to mobilise a conscious population of Muslim Youths who understand the need to live as citizens in peace with their Christian counterparts, traditional rulers and even pagans.

He affirmed that they were in NCPC to congratulate the NCPC boss on his well deserved appointment.

According to him, “Appointing the right person for the job is as good as getting half of the job done”

He commended the Executive Secretary for his excellent performance so far since he assumed the leadership of NCPC, stating that he is one of the most popular Chief Executives in this administration.

The Grand Khadi further stated that the Christian Association of Nigeria, CAN had played very significant role in ensuring that Nigeria remains one.