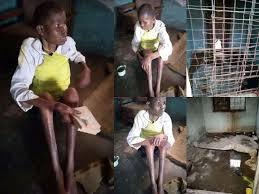 A mother of eight who was reportedly locked up in a room for four years by her husband in Orerokpe, Delta State has been released.

However, the intriguing thing about this gross man’s inhumanity to man, is that it was alleged the husband, a bricklayer, locked her up because his girlfriend accused her of being a witch.

Yet while she was caged for four years, the man fed her only bread, and would sneak into the room to have sex with her and in the process she had three children for him.

She urinated and defecated in that same room throughout the four years she was caged.

The woman, who was simply identified as Gladys and hails from Ozoro in Isoko North Local Governtment Area, Delta State, was rescued on Monday when residents in the community alerted Harrison Gwamnishu, human rights activist and founder of Behind Bars Initiative, a non-governmental organization.

The woman had eight children for the man, three of which she had while being caged.

While sharing details on Faceboook, Gwamnishu wrote: “ACCUSED OF WITCHCRAFT AND CAGED FOR MORE THAN 3-YEARS IN OREROKPE, DELTA STATE.”

“We received this few hours ago and we are currently in Orerokpe for her full REHABILITATION and the arrest and prosecution of all those involved in this despicable act.

“STORY: She spent the last four years of her life locked up by her supposed husband. She was peeing and defecating in the same room where he fed her bread. Not the regular sweetened bread though. She gave the said man 8 children, three of which she had while she was locked up by him in Orerokpe community.”

The woman has been taken to the hospital for necessary medical attention while husband has been arrested.

It sounds bizarre but true, however the case is currently under investigation.

The woman, told neighbours after she had been taken to the hospital that the husband’s girlfriend had accused her of witchcraft and had asked him to lock her up.

She also said her husband told their children that they should wait for her to die so they will throw her dead body inside the river.

According to one Onome who spoke to TPCN on the phone on Tuesday, the neighbours reported the incident to the Divisional Police Station in the area, and that led to the man’s arrest.

“She gave the said man eight children, three of which she had while she was locked up by him in the community.

“I wasn’t told I was there. I saw with my eyes. The man told neighbours his wife was deceased.

“His children when they were interviewed said they were waiting for her to die so that they can throw her away in the river.

“In the four years she was locked up she had three children for him. She was taken to the general hospital in Orerokpe yesterday and is currently receiving treatment.

“As a woman I am pained and broken. I want to appeal to well-meaning individuals if you have an NGO that is into rehabilitation of women please reach out,” she said.