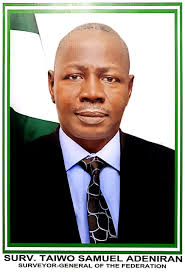 Surveyors in the country have been urged to provide political leaders at all levels requisite geospatial data that will ensure good decision making, planning and implementation of policies and programmes for the purpose of improving the condition of lives of the people.

Taiwo stated that as government is focusing on the diversfication of the economy to lessen dependence on the downstream sector, the use of Geospatial Technology to harness resources in mine, tourism, agriculture, transportation among others cannot be ignored.

“I want to quickly say that it is heartwarming that our government has come to terms with this reality as being demonstrated by the Federal Ministry of Works and Housing, including state governments establishing their GIS” Surv. General said.

Taiwo asserted that the choice of the theme for the event, “Driving IGR with Geospatial Technology” is commendable and apt, saying that emphasis on the significance of Internally Generated Revenue, IGR especially with the dwindling of financial resources across the world cannot be overemphasised.

He noted the people can only manage effectively their present and future when they can predict phenomena with substatial data of happening in their environmens, stressing that the human society can only thrive with knowledge.

“Since money is an important factor for formulation, planning and execution of nearly all human endeavours, the issue of IGR has become fundamental in the modern world. This is probably is the reason why the Federal Government continued to put its MDAs on their teos for IGR” Taiwo said.