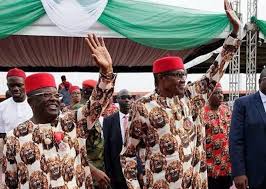 Ebonyi State Governor, David Umahi, has reacted to criticism of his political switch on Tuesday that he has no regrets leaving the Peoples Democratic Party, PDP to join the ruling All Progressives Congress, APC.

Umahi debunked claims that he left the PDP because of plans to contest the 2023 presidency.

The Governor, who said he will be quitting partisan politics in 2023, said he quit PDP to protest the injustice against the South east region.

The Governor stated that he had been an object of suspicion within PDP because of his refusal to criticise President, Muhammadu Buhari.

“Every man runs his destiny. One thing I have promised is that I will never castigate PDP; just like in PDP, my only sin is that I refused to castigate Mr President and till thy kingdom come, I will not do that because that is my family character.”

“But those who don’t have character, they were very suspicious of me because I don’t castigate the President, that I could be leaking information of PDP.

“What nonsense is that? I came from a known family and a place where there is character. So, I have got a character; nobody either in APC or PDP will say that whoever discusses anything, I have to go and leak it. To leak it for what? Is it for money, is it for fame?” he questioned.