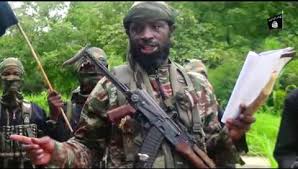 Leader of Jama’atu Ahlissunnah Lidda’awati Wal Jihad otherwise known as Boko Haram, Abubakar Shekau has again taunted the Nigerian military high command in his latest video that he cannot be arrested because he is doing the work of God.

Chief of Army Staff, General Tukur Buratai had ordered his men to capture Shekau about three times in the last few years.

President Muhammadu Buhari had also said during his campaign for office that he would defeat Boko Haram within a short time of his taking office.

The Nigerian Army had on November 11, 2020 kicked off a fresh manhunt for Shekau and other top commanders of the sect.

In a new video, however, Shekau said nobody can arrest him because he was doing the work of God who will protect him.

In the video, shot in a question and answer format, Shekau vowed that the war would continue even after him.

“Arresting me will not stop the work we started. What confuses you is you think the religion is mine but it belongs to Allah,” he said.

He also spoke on the members of Boko Haram who recanted from the group and joined the amnesty program in the northeast.

“They have left the fold of religion,” Shekau said of the ex-fighters.

He, however, said he and his men would never consider such a path in their lifetime, putting aside any chance of reconciliation between his group and the state.