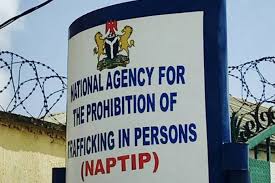 The National Agency for the Prohibition of Trafficking in Persons, NAPTIP has called for cooperation among relevant agencies in the fight against human trafficking and child labour in the country.

The NAPTIP Benin Zonal Commander, Mrs Ijeoma Uduak, made the call at an awareness campaign against Trafficking of Youths held in Auchi, Etsako-West Local Government Area of Edo on Monday.

“It is important for relevant agencies to work together to effectively tackle the problem of human trafficking and child labour in our society.

“Such cooperation would go a long way towards effectively tackling the different aspects of human trafficking,’’ she said.

Uduak said that the command would not relent in its efforts to stamp out the menace of human trafficking in Edo, adding that a continuous campaign would be staged in the state to achieve the goal.

She added that the agency is fully committed to the prevention of all forms of human degradation and exploitation through the coordinated use of the nation’s crime and law enforcement resources to stamp out human trafficking in the state.

“The public needs to understand that they should also support NAPTIP in tackling the menace of human trafficking.

“This can only be achieved if they themselves know what the scourge is all about and the negative consequences of human trafficking on our people.

“Today, we are creating awareness on human trafficking which is the recruitment, transportation, purchase of an individual within or outside Nigeria by means of deception and coercion for the purpose of exploitation.

“We have given them the antics and modules of varieties of human traffickers so that they are now aware.

“They are like the one that will take the message down to the rural communities,’’ she said.

“During this COVID-19, the NAPTIP Benin Zonal Command recorded six convictions and more cases are still on the verge of judgement,” she said.

She advised parents to stop encouraging their children to travel abroad through illegal means at the expense of their lives to make quick money.

According to Uduak, anybody caught in the act will be prosecuted alongside those who collaborated with them.