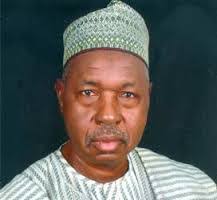 Governor Aminu Masari of Katsina State has said that synergy between Nigerian Army, Air Force and other security agencies is the only way to end banditry, kidnapping, cattle rustling and other criminalities.

Masari said this during his site inspection of the proposed Nigerian Air Force landing site in Funtua on Monday.

“There must be synergy between the Army, Air Force and other security agencies towards tackling the menace.

“The governors in North-West and North-Central zones can’t do anything because they don’t have the expertise knowledge of fighting, it is the soldiers that are trained to fight.

“I, therefore, urge the Army, the Air Force to go back to their drawing board and strategize and fashion way out how to synergize.

“Our role is to provide logistics and necessary support to enable them to succeed to arrest the situation,” Masari said.

Masari said that the provision of the Air Force landing site in Funtua would go a long way in improving security for the people of Katsina State and their neighbours, like Zamfara and Kaduna States.

He explained that the facility was being provided for Air Force aircraft to land when they received a distress call on eventualities.

“All necessary arrangements have been put in place to compensate the affected people for their land and the work will soon commence in earnest for the project,” he said.