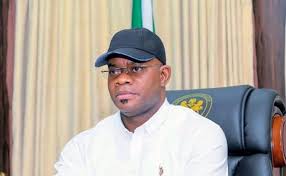 The Governor of Kogi State, Alhaji Yahaya Bello, has dissociated from report that his administration has imposed a tax on individual loaf of bread to be paid by bakeries and bread sellers in the state.

Chief Edward Onoja, Governor Bello’s Deputy made this known in a statement on Saturday.

‘We have just seen a purported consultancy agreement between one of our ministries and a private firm to impose an ill-conceived levy on bread in the state.

“For the records, neither the Governor nor the state executive council has imagined or proposed such a devilish tax regime, how much less imposing same on any food or essential commodity, not to mention bread which is a table staple and the basic lifeline of many a household,” the statement reads.

It insisted that such a claim was “in fact, an embarrassment to the state government.”

The Deputy Governor revealed that his boss directed him to debunk the news to underscore how serious government considered the disinformation.

“I am directed by His Excellency to give the lie to news of an alleged tax imposed on each loaf of bread to be sold in Kogi State. There is no iota of truth in the claims that we have approved such wickedness, because we have not and cannot.”

He highlighted Governor Bello’s responses to issues impacting the welfare of his people during the Covid-19 pandemic as proof that such a tax runs counter to everything the administration stands for.

“It is well-documented in the media that Governor Yahaya Bello has fought powerful forces, more than any other governor perhaps, to keep his people safe. As CoviD-19 ravaged the country and the world he has mobilised them for lifestyle changes that defeated the virus in the state.

“He spared them lockdowns and the inherent disruptions to their lives and livelihoods characteristic of covid responses in other places. He scrupulously obeyed WHO and NCDC guidelines to provide testing to high risk individuals.”

Onoja noted that though widely excoriated in those early days Governor Yahaya Bello remained undaunted because of his desire to protect his people at all costs.

According to him, “today, the result of my Governor’s novel approach to the novel coronavirus are evident for all to see on every daily update given by the federal authorities.

“Kogi State sits at the bottom of that list, and even those 5 cases allocated to us are controversial at best. To put it mildly, we have had no confirmed case of Covid-19 in Kogi State.

“About 3 months ago we rolled out the Kogi Care Initiative, for which Council approved N1.56 billion as a post-COVID economic stimulus and recovery programme customised for different sections of our people – the poor, the elderly and the MSMEs.’ He therefore rejected the notion that ‘we can now impose a tax on individual loaves of bread sold in the state.”

The Deputy Governor said that no extra financial burden will apply for the time being on citizens and assured that “any business which has met the regulatory requirements for doing business in Kogi State including payment of routine tax is entitled to operate freely, and that includes bakeries and bread traders.”

Onoja therefore urged everyone to disregard the alleged bread tax as not only improbable but impossible in Kogi State under the current administration.

He also reassured the media and the general public that those behind the rumours would be fished out and punished.

“We will not tolerate our own officials trying to profiteer off our people in any way, or even acting ill-advisedly in manners that cause them any form of distress.”