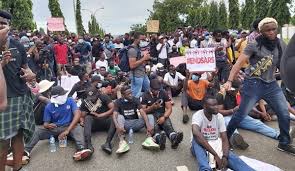 Non-governmental organisation, Human Rights Watch, HRW, has reacted to the supposed punitive financial moves being meted out to EndSARS protesters and promoters by the Nigerian government.

In a report on its website, which was made available to newsmen on Friday, HRW said Nigerian authorities appear to have used coercive financial measures to suppress protests against police brutality and independent media reporting.

The group called on authorities in Nigeria to urgently lift arbitrary restrictions, including unblocking bank accounts of protest supporters, dismissing or reimbursing arbitrary fines, and investigating and appropriately disciplining officials responsible for any abuse of authority.

“The National Broadcasting Commission,NBC, the state-run television and radio regulator, has fined three independent television stations that reported on the violent security force response to protests, using footage posted on social media that the commission claims were unverified and contributed to the violence.”

Anietie Ewang, Nigeria researcher at Human Rights Watch, warned that, “Any attempts to suppress legitimate protests and genuine calls for accountability by arbitrarily blocking funds would be a gross abuse of power”.

She added, “Such action would indicate a wider problem of malfeasance and impunity that threaten democracy, human rights, and fundamental freedoms.”

Court papers obtained by newsmen showed that the CBN in a recent application to a Federal High Court in Abuja, labeled 20 #ENDSARS protesters, whose accounts were frozen as terrorists, in efforts to obtain an order for the freezing of their accounts.