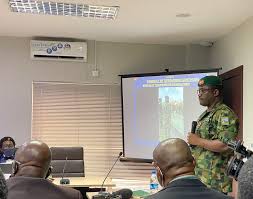 The Nigerian Army on Saturday said it evacuated over N2billion for banks affected by violence and looting during the #EndSARS protests.

The Commander of 81 Military Intelligence Brigade, Victoria Island, Lagos, Brig. Gen. Ahmed Taiwo said banks were the most affected by the violence.

He testified before the Lagos State Judicial Panel of Enquiry and Restitution for Victims of SARS related abuses and other matters.