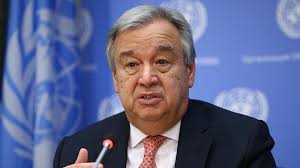 United Nations Secretary-General Antonio Guterres on Wednesday called on the authorities in Mozambique to investigate brutal killings this past weekend in the country’s northern Cabo Delgado province.

He also urged the government to bring the perpetrators to justice.

In a statement issued by his spokesperson, Guterres expressed shock over the reports of massacres by non-state armed groups in several villages, including reported mass beheadings and kidnapping of women and children.

“He strongly condemns this wanton brutality,” the statement said.

“The Secretary-General urges the country’s authorities to conduct an investigation into these incidents and to hold those responsible to account. He calls on all parties to the conflict to abide by their obligations under international humanitarian and human rights law.”

Guterres also reiterated the UN’s commitment to continue to support the people and government of Mozambique in urgently addressing immediate humanitarian needs and efforts to uphold human rights, promote the development and prevent the spread of violent extremism.

An armed militant group attacked several villages in northern parts of the province between 6 and 8 November, brutally killing more than 50 people, abducting several women and children and burning down homes.

According to the UN Office for the Coordination of Humanitarian Affairs (OCHA), the humanitarian situation in Cabo Delgado province deteriorated in 2020 on the back of an escalating conflict.

This is compounded by a fragile situation of chronic underdevelopment, consecutive climatic shocks and recurrent disease outbreaks.

An increasing number of attacks by non-state armed groups, particularly impacting the northern and eastern districts of the province, have caused massive and multiple displacements, disrupting people’s livelihoods and access to basic services.

More than 355,000 people are estimated to be internally displaced in Cabo Delgado, and its neighbouring Nampula and Niassa provinces, as of the end of October 2020, with numbers, said to be rising by the day.

The violence, displacements and consequent loss of livelihoods are also increasing food insecurity in Cabo Delgado where over 710,000 people are facing severe hunger, including displaced persons and host communities.