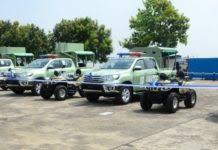 NNPC made the donation as part of its efforts at securing critical oil infrastructure along the Altas Cove to Mosimi corridor.

The vehicles were formally received today by Gen. A. G. Olonisakin, the Chief of Defence Staff, who was represented by AVM J. A. Yusuf.

The event, which was attended by NNPC GMD, Mele Kyari, took place at the Western Naval Command, Apapa, Lagos.

NNPC GMD Mele Kyari commissions the vehicles for use

Olonisakin said that the mobility assets would enhance OPERATION AWATSE’s capacity in their area of function.

“These four Toyota Hilux vehicles and four Quad Bikes will no doubt enhance OP AWATSE’s capacity to rapidly deploy enforcement resources for our energy security within the overall context of our national security,” he said.

He said that all efforts including the terrain advantages that the assets being inaugurated offered, must be emplaced to ensure the security of pipelines.

“The dwindling oil prices internationally saw the downward trend in government revenue generation for some time now. This among others has necessitated the need for judicious use of resources to minimise waste.

“Therefore, all efforts including the terrain advantages that these assets being inducted today offer must be emplaced to ensure the security of pipelines and the smooth distribution of petroleum products across the country,” he said.

He said that the Defence Headquarters would continue to provide the necessary support to ensure the successful take-off of the Forward Operation Base and other initiative that would ensure adequate security of the Atlas Cove.

Rear Adm. Oladele Daji, the Commander of Operaton Awatse said that the equipment would be judiciously used to derive the maximum benefit to enhance patrol efforts.

“The vehicles are part of NNPC’s logistics support for the patrol of Atlas Cove in order to reinforce the security of the System 2B NNPC pipelines from Atlas Cove to Mosimi in Ogun State.

“As we may be aware, the NNPC System 2B is a national asset, strategic to the country for reception of refined petroleum products and distribution to NNPC depots across the South West and beyond.

“Over time however, the facility has become attractive to saboteurs, who regularly attempt to make illegal insertions into the pipelines to steal petroleum products,” Daji said.

OP AWATSE activated a clearance operation nicknamed KUROMBE to dislodge vandals from Atlas Cove and environ as well as remove all encumbrances from the NNPC Pipeline’s Right of Way from Atlas Cove to Mosinmi.

The empty jerry cans would have been used to steal an estimated N1.6 billion worth of petrol.

Similarly, a total of 310 hand-dug pits filled with PMS used by pipeline vandals for siphoning petrol were discovered during the clearance.

Thirty one persons including some foreigners, were arrested for involvement in petroleum products theft and pipeline vandalism and were handed over to relevant prosecuting agencies.