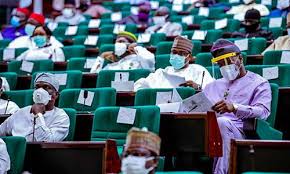 Members of the House of Representatives, have demanded an apology from the Chairman/Chief Executive Officer, Nigerians in Diaspora Commission, Abike Dabiri-Erewa, for failing to appear to defend the commission’s 2021 budget on Tuesday.

Dabiri-Erewa was to appear before the House Committee on Diaspora Matters, to defend NIDCOM’s 2021 budget proposal.

The session was scheduled to start at 11:00 am but as of 12:17 pm, when the committee adjourned the sitting, she had yet to arrive at the meeting venue.

Chairman of the committee, Tolulope Akande-Sadipe, before ruling on a motion for adjournment, condemned Dabiri-Erewa for keeping the lawmakers waiting.

Akande-Sodipe expressed disappointment that the NIDCOM DG, allegedly chose to honour an invitation by the Senate instead of appearing before the committee.

The NIDCOM boss later showed up, about 10 minutes after members of the committee had dispersed.

She was sighted going into Akande-Sadipe’s office.

When contacted, Dabiri-Erewa told our correspondent that she had resolved the issue with the committee and the hearing had been rescheduled.

Meanwhile, the House Committee on Culture and Tourism, on Tuesday, commended the 2020 budget performance of the Federal Ministry of Information and Culture.

Chairman of the committee, Omoregie Ogbeide-Ihama, gave the commendation when the Minister of Information and Culture, Lai Mohammed, appeared before lawmakers to defend the culture component of the ministry’s 2021 budget.

The committee had on Wednesday last week refused to receive Mohammed when he appeared for the budget defence citing his late submission of documents as a reason for their action.

The lawmakers had later had a closed-door session with the minister.

Earlier, Mohammed said, N616m was appropriated for the ministry’s Overhead expenditure while N444m was released, representing 72 per cent of the sum appropriated.