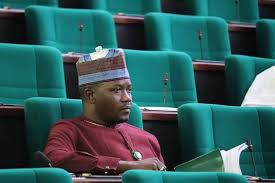 By By Benjamin Arida

A member of the House of Representatives, Victor Mela Danzaria representing Billiri/Balanga federal constituency of Gombe State, has been convicted for lying under oath.

A magistrate’s court in Wuse, Zone 6, Abuja, convicted him on Tuesday for giving false information to the Independent Electoral Commission (INEC) in order to contest the 2019 election.

Danzaria, an All Progressives Congress (APC) member, was dragged to the court after the Federal Capital Territory (FCT) Police Command accused him of lying under oath while filing the INEC form CF001 prior to the 2019 elections.

Meanwhile, the magistrate deferred the sentencing of the lawmaker after his lawyer took a plea.

Responding to the ruling on a series of tweets on his Twitter handle, @HonVMD, on Tuesday, the lawmaker vowed to challenge the rule.

Part of his tweets read, “I would like to call on our friends, supporters and our sympathizers to remain calm as well as be rest assured that I will challenge today’s perverse decision at the appellate court, immediately.

“Let it be known that a lot of water has passed under the bridge on matters relating to the mandate you gave me freely in 2019. In due course, we will let the cat out of the bag; and our people will know has transpired so far.

“Let it also be on record that, I had earlier deposed to an affidavit at the FCT High Court to cure the defect in the above-mentioned INEC Form and also made necessary Newspaper Publications as required by law.

“Let it be on record that this case is a Direct Criminal Complaint instigated and filed by Hon. Ali Isa JC against my humble self at the FCT Police Area Command, Maitama.”