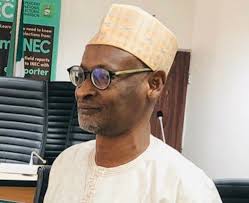 A National commissioner of the Independent National Commission, INEC, Mr Abubakar Nahuche, has resigned his appointment, just a year before his term expires.

Okoye said that Nahuche, who was the Chairman, Estate, Works and Transport Committee, representing North West, resigned his appointment on personal reasons.

Okoye said President Muhammadu Buhari had accepted Nahuche’s resignation and thanked him for his services to the nation.

Nahuche from Zamfara was sworn-in as INEC national commissioner on Dec. 7, 2016.

He attended the Ahmadu Bello University (ABU) Zaria and graduated with a Bachelor of Science degree in Electrical Engineering.

He then went to the Rochester Institute of Technology, New York, U.S., and studied for his Master’s degree in the same discipline between 1976 and 1978.

He worked at various times as Project Manager, Nigerian Army Fixed Communication Project and as Assistant to the Commander, Corps of Signals of the Nigerian Army from 1983 to 1984.

He was also Special Assistant to the Minister of Communication and was with the Nigerian Security Organisation, NSO from 1984 to 1986

He was appointed the Chief Executive Officer of the defunct Nigerian Telecommunications Limited, NITEL in June 2007 and served until February 2008.

*This story was re-edited. Nahuche has a year to spend as commissioner, not days and is term is therefore not due for renewal by President Buhari.