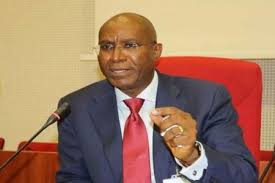 Deputy President of the Senate and Chairman, Senate Adhoc Committee on Constitution Review, Senator Ovie Omo-Agege has welcomed the pledge by the United Nations Entity for Gender Equality and the Empowerment of Women (UN Women) to offer technical support to the panel.

He has also called on states yet to domesticate the Violence Against Persons Prohibition,VAPP Act to do so without further delay.

Senator Omo-Agege spoke in Abuja when he hosted a delegation from the UN Women, led by the Deputy Country Representative, Mr. Lansana Wonneh.

The Delta Central lawmaker assured women that their interests would be protected, but not to the detriment of the constitutional provisions against discrimination of whatever form.

He called on the Executive arm of government to always engage the Legislature before signing treaties and agreements.

This, he explained, will enable accelerated domestication by the National Assembly.

“We have had some form of disconnect between the Executive and Legislative arms of government. Frankly, we want to be carried along before entering into some of these treaties and agreements because Section 12 of the 1999 Constitution requires the involvement of the National Assembly for any of that to become effective. And, unfortunately, that was not done. That is why we have that drawback with respect to the Beijing Declaration.

“But having said that and taking into account the limitations arising therefrom, we decided that it might be best if we had approached this incrementally. And that is why some of us stood solidly behind Senator Biodun Olujimi in her Gender Equality and Opportunity Bill which, to a large extent, was actually seeking to domesticate the agreements in Beijing Protocol amongst others. But we ran into problem with Section 42 of the 1999 Constitution because the concern of some is that in seeking to remedy it, we should not create another set of discrimination against another.

“We have been looking for ways to address this. I have taken a special interest in the situation because I was part of the parliamentary delegation at the Commonwealth Parliamentary Conference in Uganda. And I sat down with the Speaker of the Ugandan Parliament and got some form of education from her. I met with her again in Canada in January at the Presiding Officers Conference. I sat down with her again, all aimed at preparing me for the fight that is to come. I can assure you that we are looking into that.”

The panel, he added, is already understudying the Ugandan experience in the area of women political representation.

“Even the elections a couple of days ago in the United States, from the exit polls, about 55 percent of the voters were women. There is no doubt that you have more women than men in our country but we need to put them in a position where they can canvass their own views and not impose our own views on them. They should be in the best position to articulate their own views. We are working on that as part of the constitution review exercise.

“We are looking at the Ugandan model. I can assure you that there will be a significant movement in the direction of what is being canvassed on behalf of our women. But all I will ask of you is that you help to mobilise the electorate, opinion leaders as to why this is needed,” he stated.

Omo-Agege also asked the organisation to help in mobilising the House of Representatives in concurring to the Sexual Harassment Bill passed by the Senate as well as the domestication of the VAPP Act in all the states of the Federation.

While applauding the Senate for making Gender Equality for Women and Girls one of the thematic areas of the exercise, he lauded the passing of the Sexual Harassment Bill by the Red Chamber.

Wonneh also highlighted the various ways the organisation has helped in promoting issues of gender equality in the country.

“We are here to commit our partnership. As the UN organisation particularly looking at gender equality and empowerment of women, we want to pledge our commitment to supporting the effort of the constitution review process; to work with your committee and every other stakeholder in promoting the issues of gender equality, which is a fundamental development building block that can put any country to wherever they aspire to go to,” he said.