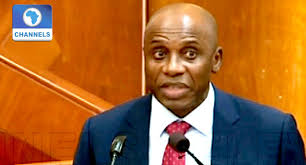 The Minister of Transportation, Rotimi Amaechi on Friday said that the Federal Government requires the sum of N $656million to complete work on the Lagos-Ibadan railway project.

Amaechi who spoke while defending the 2021 budget of the ministry before the National Assembly Joint Committee on Land and Marine Transport, said the amount is needed to put in place necessary infrastructures for the project to serve its intended purpose.

He said that the Ibadan-Kano railway project also required an injection of $645.3million as advance payment to enable the Federal Government to complete its loan signing agreement with the China Exim Bank.

Amaechi said: “Under the railway modern programme I am happy to report that the construction of Lagos – Ibadan Standard Gauge line has reached 92 percent project completion.

“However, for the project to achieve full loan drawdown from our co-financier, China EXIM Bank, and attain practical completion for it to be used for the intended purpose, some aspects of works involving construction of upgraded railway stations, signaling and telecommunication system, power supply scheme and construction of pedestrian and overpass bridges have to be completed.

“This additional and extra works amounting to US$656million which is to be financed 100 percent by the Federal Government of Nigeria has been approved by the Federal Executive Council for implementation.

“Similarly, for the implementation of the Ibadan -Kano railway which is the outstanding segment of the Lagos-Kano railway project, one of the conditions precedent to signing of the loan agreement is the release of advance payment in the sum of US$864million.

“Out of which Government has released the sum of US$218.7million as part payment leaving a balance of US$644.3million.”