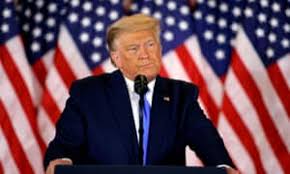 President Donald Trump has claimed the US election is fraudulent and declared victory, even while votes are still being counted.

Trump, in an address at the White House, said he is going to the Supreme Court to stop all voting, as he sensed fraud.

He declared victory, even as the most important battleground states remain too close to call.

Trump said he would fight for the results at the supreme court.

Trump added: “We will be going to the US supreme court. We want all voting to stop.”

Trump stated that in states where vote tallies currently show him leading should be called in his favour, despite significant outstanding votes yet to be counted.

“We were getting ready for a big celebration. We were winning everything. And all of a sudden it was just called off,” he said.