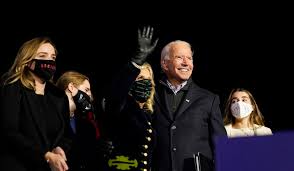 Voters in Dixville Notch, a village of 12 residents in the US state of New Hampshire, kicked off Election Day at the stroke of midnight on Tuesday by voting unanimously for Democratic nominee Joe Biden.

The vote and count only took a few minutes, with five votes for Biden and none for President Donald Trump, who is seeking a second term.

The tiny northeastern town in the middle of the forest, near the Canadian border, has traditionally voted “first in the nation” since 1960.

Neighboring village Millsfield also begins voting at midnight but a third village in the area, which typically follows the same tradition, canceled overnight voting due to the coronavirus pandemic.

Electoral laws in New Hampshire allow municipalities with fewer than 100 residents to open their polling stations at midnight and to close them when all registered voters have fulfilled their civic duty.

But with a huge expansion in mail-in voting to safeguard against the Covid-19 pandemic, a record of nearly 100 million people have already cast ballots.

While many early votes are believed to have been cast by Democrats — encouraged by Biden to take advantage of the opportunity — Trump’s campaign is hoping for a massive wave of Republican supporters voting in person on Tuesday.