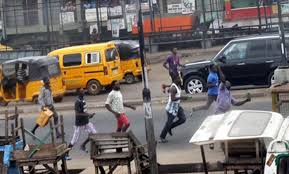 There is pandemonium in Ketu area of Lagos as rival cult groups engage in brutal clash, with dangerous weapons freely used.

Traders are said to have hurriedly close their shops and escape for their lives as shootings were heard in the area.

The whole area is deserted while policemen have been drafted.

The crisis which has spread to Mile 12 area was said to have begun on Monday night when the cultists first engage themselves in bitter clash leading to the death of one of them.

A reprisal attack took place on Tuesday evening, as the hoodlums battle one another in brutal fight.

Concern residents have been sending twitter messages to people living around Ketu and Mile 12 areas to stay off as the clash is massive.

Segun Awosanya, a Nigerian realtor and human rights activist, popularly known as Segalink said on twitter that “hoodlums are declaring a state within the state in Lagos between Ketu (Tipper Garage) & Owode inward Ikorodu. The road construction is causing daily traffic coupled with clashes of cult groups leading to incessant robberies in the morning and evening.”

According to Rotimi O.A, “Dear Mr Governor, you need to beam your search light on this Mile 12, ketu and Environs. A lot of security issues. I witnessed this today. Only God saved one.”

A top police chief who craved anonymity told PM NEWS that policemen have been drafted to the area to maintain peace.

He said he heard that lives were lost but could no confirm how true it was.