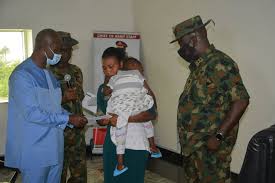 Governor Wike had on Wednesday last week during a condolence visit to the Rivers State Commissioner of Police, Joseph Mukan, announced the donation of N20million to each family of the four policemen and six Army killed by IPOB members in Oyigbo.

The cheques were presented to the bereaved widows at the State Police Command and 6 Division, Nigerian Army, in Port Harcourt, respectively on Tuesday.

Governor Wike said the gesture is in fulfillment of his earlier promise to alleviate the plight of the widows and their children.

Represented by the Secretary to the State Government, Dr. Tammy Wennike Danagogo, the governor described the murder of the security personnel by IPOB members as unacceptable and should be condemned by every right-thinking Nigerian.

Governor Wike told the Commissioner of Police that Government will not tolerate any terrorist group like IPOB in the state or allow them to kill any innocent citizen, particularly policemen and soldiers who are defending and protecting citizens of the state.

“As a Governor who matches his words with action, he has sent us to come and redeem that promise and to present the cheques of 20 Million each to the widows of the four police officers killed by IPOB.”

Governor Wike assured the State Commissioner of Police that the State will always stand with the Police to fight crime.

In his response, the Commissioner of Police, Mr. Joseph Mukan, on behalf of the Inspector General of Police, Mohammed Adamu thanked Governor Wike for fulfilling his promise.

He said the Police have recovered some arms and arrested some persons who have made confessional statements.

According to him, 22 persons have been charged to court.

Similarly, at the 6 Division, Nigerian Army, Port Harcourt, Governor Wike commiserated with the Nigerian Army, the widows and families of the 6 soldiers killed by IPOB.

He said Rivers State Government will ensure that the criminal elements who killed the soldiers and cart away their arms and ammunition are arrested and prosecuted.

“The Governor made a pronouncement that he will give a token sum of 20 Million to each of the widows of the slain soldiers. So, we are here to fulfil that promise to give cheques to the widows so that they can be able to survive in the absence of their breadwinners” he said.

In his remarks, the General Officer Commanding 6 Division, Nigerian Army, Major General Orlu Irefin expressed the gratitude on behalf of the Chief of Army Staff, General Tukur Yusuf Buratai and the entire Nigerian Army to the Rivers State Governor for the kind gesture to the widows of the slain soldiers.

He dispelled news in social media on the activities of the Army in Oyigbo, emphasizing that action of the Army in the area is within the ambit of the law and rules of engagement.