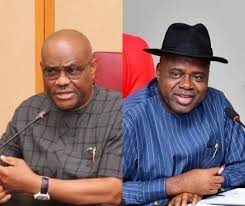 Bayelsa State has said Tuesday’s verdict of the Supreme Court on the matter it instituted over the disputed oil wells with neighbouring Rivers State did not amount to a resolution of the dispute.

It also said contrary to reports in the media, the apex court’s verdict did not cede the oil wells or area to Rivers.

The Bayelsa State Commissioner for Information, Orientation and Strategy, Hon. Ayibaina Duba, who gave the explanation on Friday, said the clarification was necessary in order to dispel erroneous reports and misinformation.

The Information Commissioner explained that the Supreme Court, by its decision, only advised Bayelsa State to await the ruling of the Appeal Court where it also filed an appeal seeking to nullify the judgement of the Federal High Court delivered in favour of Rivers on the disputed oil wells.

He further stated that the apex court did not rule on the substance of the matter brought before it as it felt it was premature to do so when the appellate court had not decided on the same issue.

“Justice Sylvester Ngwuta felt that filing another application before the Supreme Court on a similar matter was an abuse of court process.

“So, the apex court, in its wisdom, felt it was appropriate for the Appeal Court to determine the matter before it before we can approach the highest court of the land if necessary and that is the exact position.

“It is therefore wrong for anyone to create the erroneous impression that the apex court gave judgement in favour of Rivers when that was not the case.

“Besides, the dispute does not amount to a strain in the relationship between Bayelsa and Rivers. The issue for determination is purely administrative.

“We are contesting the decision of a court, which we consider unfair to us as a state. There is nothing unpleasant in our decision to challenge an unfair ruling of a Federal High Court.

“Bayelsa is not a part of Rivers as the area in contention is in Oluasiri Clan, which is in Nembe Local Government Area of Bayelsa,” Duba said.