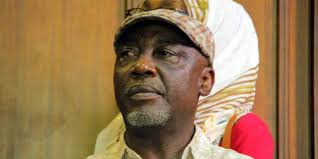 Trial of former Minister of Interior, Abba Moro over alleged Nigeria Immigration Service, NIS, recruitment scam was on Frtday stalled by the absence of Justice Nnamdi Dimgba of the Federal High Court, Abuja.

The Economic and Financial Crimes Commission, EFCC, on May 11, 2016, arraigned Moro, alongside with a former Permanent Secretary in the ministry, Mrs. Anastasia Daniel-Nwobia; an ex-director in the ministry, Felix Alayebami and a firm, Drexel Tech Nigeria Ltd.

They were arraigned on an 11-count charge bordering on conspiracy, fraud and money laundering in the botched 2014 NIS recruitment exercise.

Although the charges were amended on February 23, 2018, the defendants pleaded not guilty to all the charges.

NAN also reports that Justice Dimgba had, on June 25 while delivering ruling in a no-case submission by the defendants, discharged and acquitted Dretex Tech Nigeria from the entire charges.

Drexel Tech was a private information communication technology company used by the Ministry of Interior to carry out the recruitment exercise.

And after the evidence of the 12 prosecution witnesses, the company and the three other defendants filed a no-case submission asking the court to quash the charges against them.

Drexel Tech Nigeria Ltd, through its Counsel, S.I. Ameh, SAN, argued that the EFCC had not made out a prima facie case against it to warrant calling its witnesses in the charges of conspiracy, conversion and validity of the contract and its execution, among others.

Dimgba upheld the no-case submission of the defence, discharged and acquitted the firm on counts 1, 8, 9, and 10.

The judge agreed with the submission of the company that there was no ground to compel it to open its defence.

According to Dimgba, I uphold the no-case submission of the 4th defendant (Drexel Tech) in relation to counts 1, 8, 9, 10 where it was charged.

“Being the only counts where it was charged, I hereby discharge and acquit the 4th defendant of these counts, and thus free it from further participation in this amended charge dated 23/01/18,” he held.

The judge also discharged Sen. Moro of the criminal charges brought against him by the EFCC.

He held that the anti-corruption agency failed to establish ingredients of fraud that could link the lawmaker with the alleged offence.

Dimgba, while discharging Moro who was a minister under President Goodluck Jonathan government from the alleged fraud aspect of the recruitment exercise, however ordered him to defend himself on the public procurement aspect of the charges.

The judge held that although Drexel Tech Ltd. used for the recruitment had been discharged and acquitted, Moro, who is currently a senator representing Benue South Senatorial District, would have to defend himself on the preparations put in place before the ministry embarked on the recruitment.

He, then, fixed October 29 and 30 for the defendant to open his defence.

Although the matter was supposed to come up on Thursday, due to the public holiday, the court did not sit.

Also, at the resumed hearing on Friday, Justice Dimgba was not in court.

The matter with suit number: CR/46/2016 was first of the seven cases scheduled on the cause list.