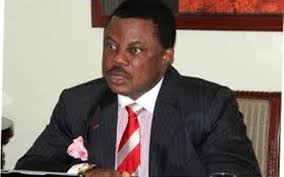 Anambra state Governor, Chief Willie Obianohas, has announced the distribution of ₦2billion to agro-farmers in the state, to support their agricultural activities.

The Governor announced this while addressing journalists after his tour to communities submerged by flooding in the state on Friday.

Obiano disclosed that the fund, which would be distributed in three weeks time, was received from the Central Bank of Nigeria, CBN.

He said 60 per cent from the fund will go to women, while 40 per cent will go to men, adding that this will be launched at Ekwueme Square in Awka, the state capital.

According to him, “The agency in charge has profiled who should get what and when they will round up the process; we should be able to launch it immediately for distribution”

Gov. Obiano spent not less than hours on a Naval Boat touring the submerged communities in Anambra East and West, as well as Ogbaru local government areas.

He was accompanied by the Executive Secretary, Anambra State Emergency Management Agency, SEMA, Chief Paul Odenigbo and other top naval and police officers.

The governor observed that even though the floodwater was receding it had destroyed many properties in its wake. “Houses are still sub merged and farmlands along with planted crops washed away.

“The situation has displaced a lot of families. It has destroyed their farm produce. There is a need to rehabilitate them because they are trying to survive from the shock of COVID-19 pandemic before the emergence of flooding.

“They require major support both in cash and material items needed for their rehabilitation.’’

He pleaded with the Federal Government to intervene in the situation in order to restore their fading hopes.

Reacting, Chief Odenigbo maintained that the FG had since sent in a team from National Emergency Management Agency, NEMA, to do proper assessment of affected flood victims in the state.

Chief Odenigbo pointed that the assessment would include people and families affected, farmlands and buildings.