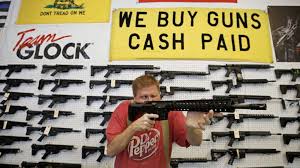 America’s leading retailer, Walmart has pulled guns and ammunition from its shelves as concerns grow over likely violence in the US election on 3 November.

Wall Street Journal, which first reported the story said the retailer was looking to head off any potential theft of firearms if stores are broken into amid any civil unrest caused by the upcoming presidential election.

“We have seen some isolated civil unrest and as we have done on several occasions over the last few years, we have moved our firearms and ammunition off the sales floor as a precaution for the safety of our associates and customers,” Walmart said in a statement to USA TODAY.

“These items do remain available for purchase by customers.”

Walmart sells firearms in about half of its 4,700 stores.

A new USA TODAY/Suffolk University Poll found Americans are increasingly worried about what will happen as this year’s tumultuous election comes to a conclusion next week, including whether the voting will be peaceful and the outcome broadly accepted.

Three of 4 voters express concern about the possibility of violence on Election Day.

Only 1 in 4 say they are “very confident” that the nation will have a peaceful transfer of power if Democratic challenger Joe Biden defeats President Donald Trump.

He said the expected violence will be “a test” for the social network.

Zuckerberg expressed his concern while describing safeguards against misinformation and voter suppression at the leading social network that are intended to avoid the kinds of deception and abuse that played out four years ago.

“I’m worried that with our nation so divided and election results potentially taking days or weeks to be finalized, there is a risk of civil unrest,” said Zuckerberg, who had also been grilled during a session on Capitol Hill earlier this week.

“Given this, companies like ours need to go well beyond what we’ve done before.”