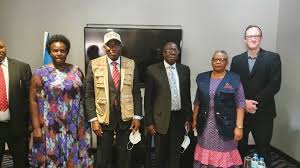 In a statement issued on Tuesday, the Chairperson urged all stakeholders, political parties and their supporters “to participate in the voting process peacefully and to refrain from any acts of violence. He further urges the authorities to ensure a conducive environment to enable citizens to cast their votes in a safe and peaceful manner.”

Mahamat further recalled, “the commendable journey that the United Republic of Tanzania has traversed thus far towards building democratic governance and sustaining peace, and urges that the 28 October 2020 General Elections offer a renewed opportunity to deepen democracy and peace in the country.”

Former President Jonathan is coordinating the activities of the AU team of expert observers who are already in Tanzania for the elections.

It is the third time Dr. Jonathan will be leading the AU election observation mission and the second consecutive time he will be observing the election in Tanzania, having led the Commonwealth Observer Gjonathanroup to the East African nation’s last general election in 2015.

In a letter of invitation signed by the Chairperson of the African Union Commission, Moussa Faki Mahamat, the AU commended Dr. Jonathan’s efforts towards democratic consolidation and peacebuilding in Africa

It said: “Given Your Excellency’s vast experience and commitment in promoting democracy and peace on the continent, I would like to invite you to lead the Mission to the United Republic of Tanzania.”

Since leaving office in 2015, Dr. Jonathan has been actively engaged in numerous international assignments, including leading peace missions and different Election Observer Missions to various African nations including Tanzania, Zambia, Liberia, Sierra Leone, South Africa and Mozambique. As the Economic Community of West African States, ECOWAS Special Envoy to Mali, the former President has led several mediation missions to Bamako, a commitment that helped restore peace to Mali after a protracted socio-political crisis.