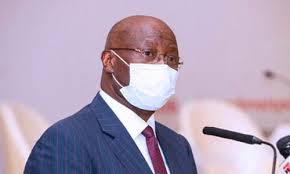 The Federal Government has pleaded with those who looted medical storage facilities to return the vaccines and other medical consumables they carted away.

The Government has expressing shock at the looting of some warehouses across the country, also explained the inability of some states to complete the distribution of palliatives sent to them by CA-COVID, a private sector coalition supporting the national response against COVID-19 pandemic.

It urged state governments not to also shut down their isolation centres, saying there is need to be at alert in case of a resurgence of the pandemic.

Chairman of the PTF and Secretary to the Government of the Federation SGF, Mr Boss Mustapha, while speaking at a media briefing by the Presidential Taskforce PTF on COVID-19, said CA-COVID worked with the state governments in the distribution of their palliatives.

According to Mustapha, “Of particular concern to the PTF, is the issue of palliatives found and looted from various warehouses around the country. It is important to make the following clarifications. The Federal Government Palliatives consisted largely of the 70MT of grains released from the Strategic Grain Reserves as well as rice secured from the Nigerian Customs Service. The share for each State were handed over to the State Governments for onward distribution to the citizens.

“The private sector coalition, CACOVID that has been quite supportive of the Federal Government, worked with the States through the Nigerian Governors’ Forum to determine the quantum of their intervention, which was intended to be effective and equitable.

“A number of indices were worked out for this purpose. The National Coordinator shall also provide further distinction and the modus operandi for the distribution of the palliatives donated to the states by the coalition” he said.