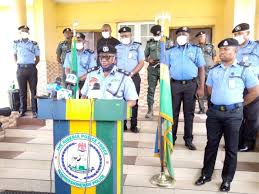 The remains of three police officers and a soldier killed and burnt by suspected members of the Indigenous People of Biafra, IPOB last week have been recovered by the Rivers State Police Command.

The state Commissioner of Police, Joseph Mukan, disclosed this when he led heads of other security agencies to Afam in Oyigbo and other places where violence took place to assess the extent of damage on Saturday.

Other areas visited were Sangana and lkwerre road in Mile one, Diobu axis of Port Harcourt and Onne in Eleme Local Government Area.

Mukan said the officers, including the Divisional Crime Officer, DCO of Oyigbo were hacked to death by the IPOB members and burnt.

Three copses of policemen and a soldier were burnt alive during an invasion by suspected IPOB members.

Mukan told journalists that an investigation has been ordered into the incident, promising that the command would do everything to ensure that those involved in the dastardly act were punished.

He said the DPO of Oyigbo Police Station was alive, noting though he escaped by whiskers.

“Comprehensive investigation is still in progress; most of the vehicles you see here are brought by civilians for safe keeping. Unfortunately, they got burnt

Meanwhile, the Northern community in Rivers State said some traders were killed during the attack.

The Chairman of the Northern community in Rivers State, Musa Saidu, disclosed this while speaking on a radio station, 93.7 Rhythm Fm, in Port Harcourt, monitored by our correspondent on Saturday.

However, the state police command said the deaths were not reported.