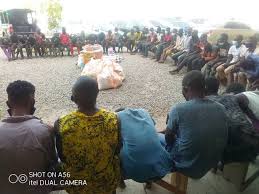 FCT Commissioner of Police,Mr. Bala Ciroma, made the disclosure at a news conference on Monday in Abuja.

Ciroma said that the operation that led to the arrest was necessitated by the looting and destruction of public and private warehouses in Abuja by some suspected hoodlums.

He also warned people involved in all forms of criminality in the territory to desist from such acts, especially looting and vandalisation of public property in the nation’s capital.

He said, ” It’s on record that in the last 2 weeks, the FCT and other parts of the federation have witnessed various forms of protest and demonstration under a different guise.

“Some of which have taken different colouration and dimensions which has resulted in loss of lives, destruction of property and looting.

NEWS: Delta Police Command begs for peace amid widespread violence
“In the bid to ensure the protection of lives and property within the territory, the command has arrested 51suspected looters and recovered looted items.”

Ciroma also said that the command would not condone acts capable of undermining the safety of lives and property of residents in the FCT.

He said that in compliance with the directive by the Inspector-General of Police Mohammed Abubakar, the command has deployed tactical strategies such as diligent motorised and foot patrols to curb crime in the FCT.

Ciroma, however, appealed to residents to remain law-abiding and calm.