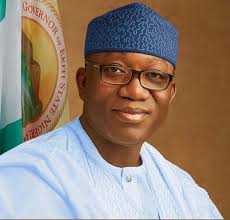 …says it is a testimony of his failure

The Peoples Democratic Party, PDP, in Ekiti State, has mocked the state Governor, Kayode Fayemi, over the looting of COVID-19 food stores by angry youths, saying it is a testimony to his failure.

Chairman of the main opposition party in the state, Otunba Bisi Kolawole, described looting of Silos and food stores in Ado Ekiti, the state capital, as a testimony of the misgovernance of the ruling All Progressives Congress, APC both in the state and at the federal levels.

Kolawole said it was shameful that the state was being ravaged by chronic hunger under the administration of Fayemi, such that people from the Fountain of Knowledge and Land of Honour would not mind scavenging for food.

In a statement made available to Idealposts on Saturday by his Special Adviser on Media, Bola Agboola, the party chairman accused the the current administration of using armed thugs to attack peaceful protesters.

The PDP frowned on looting of public and private properties under whatever guise, saying that what happened in the state capital on Friday exposed the failure of the governor to the entire world.

Angry youths on Friday in Ado Ekiti, the state capital, invaded the Silos and storage facility of the State Emergency Management Agency, SEMA, and looted the COVID-19 palliatives.

The PDP wondered why food items meant for the people were hidden away while the people suffer for hunger and starvation.

According to the statement, “That the government even had to announce yesterday that the grains carted away at the Silos in Ado Ekiti yesterday, were meant for planting shows the highest level of corruption and insensitivity on the part of the government.

The party doubted the truthfulness in the Governor’s claim, wondering why the grains are kept till the planting season is over if they were actually meant for planting.

“Even though the Fayemi-led APC government has lost ace with the people and it is certain that the party will be sent out of power in 2022, we still have a duty to call on the governor to review its style of administration to make life easier and more meaningful for the people.” PDP said.