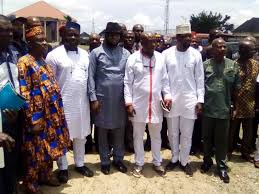 Coalition of Middle Belt Youth Leaders, has said that the teeming youths of the region would not participate in any war against the Southern as stated by President of Arewa Youth Consultative Forum, AYCF, Mallam Yerima Shettima.

The AYCF president was quoted to have threatened that the North would go to war if the #EndSARS protesters demand the resignation of President Muhammadu Buhari.

The leaders of the Middle Belt Forum, Youth wing, made this assertion in a statement signed by Comrade Nasiru Jagaba, Chris Aba and Emmanuel Zopmal after an emergency meeting on Tursday.

“The attention of the Coalition of the Middle Belt Youth Leaders has been drawn to comments credited to the President of Arewa Youth Consultative Forum, AYCF, Mallam Yerima Shettima, threatening the peace and unity of Nigeria over the ongoing #EndSARS protests.

“This is not the first time Shettima is threatening the peace of our nation as he had issued a similar threat in the past as contained in the ‘Kaduna Declaration’ in which he ordered all Igbos residing in the North to leave within three months or face daring consequences.

“We state here without ambiguity that the current #EndSARS demonstrations are not only restricted to ending SARS brutality, but also committed to making Nigeria work for all citizens across ethnic, religious, socio-economic and geo-political divides.

“We dismiss as a complete hogwash attempts by the AYCF to portray the #EndSARS protests as enmeshed in subterranean schemes to pull down the President Buhari-Federal Government. As Middle Belt youth leaders, we deprecate Shettima’s threat and hereby insist that our nationalistic youths are only actively engaged in these demonstrations to end the cruelty of police and demand a just system for a nation.

“It is tragic that the AYCF president has not found it apt to protest the uncontrolled banditry and insurgence ripping across the area Shettima claims to represent. We are alarmed that that despite upsetting statistics by the National Emergency Management Agency, NEMA that show that the dreaded Boko Haram has so far killed over 37,500 people and displaced an estimated 3.5 million people or more, including the killing of 15,000 in Kaduna, Zamfara, Katsina, Benue, Sokoto and Plateau state, the AYCF has remained silent and refused to protest against these unprovoked murders and destruction ravaging most areas of the North” the group said.

The Youth leaders expressed worry that despite the fact that more than 15 million children are currently out of school, among them 10 million street children who are popularly known as almajirai, there is no doubt that our future has been imperiled.

The youths therefore, after considering aforementioned, stated that they have no option than to condemn Shettima’s threat.

“As leaders of Middle Belt youths, we wish to reiterate and declare solemnly that our members are currently active participants of #EndSARS protests that are calling attention of both national and international communities to police brutality.

“Our youths in various Middle Belt states are standing shoulder to shoulder with other patriotic compatriots in working towards a promising future where every citizen of this country will realise their potentials without let or hindrance.

“The leadership of Middle Belt youths is perpetually opposed to Shettima’s garbage that seeks to dress #EndSARS protesters in political robes. We call on Shettima and his ilk to desist henceforth from deceiving Nigerians that the so-called North is prepared to go to war over an alleged planned plot to demand the resignation of President Buhari who has continued to perform poorly against popular expectations. All our youths are asking for is an end to police brutality and enthronement of a just system for a better and equitable Nigeria.

“We call on Middle Belt youths to continue walking with other Nigerian youths towards ensuring the emergence of a new dawn for our nation that is still trapped in the pithole of injustice and warfare from criminal elements unleashing terror on our besieged communities.” the group stated.