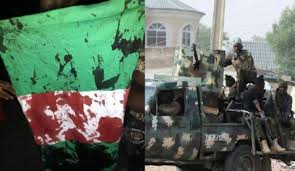 The Nigeria Labour Congress, NLC, has condemned Tuesday Lekki Toll Gate killings, saying that using of live bullets to suppress, harm and killing of peaceful protesters is a high crime against the people of Nigeria.

NLC President, Comrade Ayuba Wabba in a statement which was issued and signed by NLC Secretary Geneal, Mr. Emannuel, said the use of force to end this type protest must be roundly condemned by all patriots and lovers of democracy.

Comrade Wabba reiterate that the right to peaceful assembly is guaranteed by Section 40 of Nigeria’s Constitution, the United Nations Universal Declarations on Human Rights, the African Union Charter on Human and Peoples Rights and other relevant international conventions.

The NLC boss said, while government has a responsibility to promote law and order and curtail violence, it should be done within the context of global best practices on protest management and in line with international conventions on the protection of human rights and dignity.

The labour also condemn the infiltration of criminal elements into the current struggle as it also called for a high-powered Judicial Panel of Inquiry into the killings.

“This protest which started first in Lagos and Abuja as a peaceful demand for an end to police brutality especially the scrapping of the Special Anti Robbery Squad (SARS) and for the reform of the Nigeria Police, has spread to many parts of the country.

“We mourn the death of innocent young Nigerians who were brutally assassinated by agents of the state. We commiserate with the families of these young martyrs and the entire nation. We condemn this coldblooded murder of our young ones and the use of high-handed tactics on unarmed protesters in flagrant violation of every known convention and protocol on the management of protests.

“While we commend the maturity and focus displayed by our young people in conducting themselves in a peaceful manner during the protests, we condemn the infiltration of criminal elements into the current struggle.

“Acts of arson on public and private properties and the reported storming and jail break in the Benin Correctional Facility is condemnable and should never be tolerated. Yet, it is difficult to convince Nigerians that these acts were caried out by the peaceful protesters. We call for a high-powered Judicial Panel of Inquiry into this.

“It is our expectation that part of the outcomes of the Judicial Panel of Inquiry should be compensation for families of victims. We have already shed enough blood in Nigeria through various specters of insecurity. We cannot afford to add the blood of young protesters to the list.

“As it is right now, government owes Nigerian youths a listening ear. The youth must now be ready to discuss and secure the high grounds of their demands which has gained the attention of Nigerians and has indeed captured global interest.

“The strive for a just, equitable and prosperous country is a task we all must achieve but this cannot be realized in a situation of anarchy. We all must exercise restraint and do the needful in service to justice” he said.