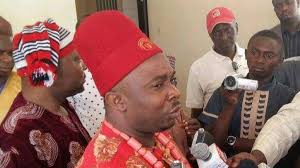 The Igbo socio-cultural organization, Ohanaeze Ndigbo Youth Council, OYC, has called on governors from the South-East geopolitical zone to join the governing, All Progressives Congress, APC in the interest of the people.

Ohanaeze hinted that there are no political benefits for the South East zone to remain in a political party that has no respect and value for the Igbos except milking their votes during elections through deceitful mediums and fake promises.

The call was contained in a press statement signed by OYC President, Mazi Okechukwu Isiguzoro and Secretary-General, Okwu Nnabuike and made available to newsmen on Monday.

Ohanaeze youths further urged the South-East governors to save the political future of the Igbo nation and collapse three states into the All Progressives Congress(APC) before the party’s National convention to control their state structures.

The body said the development would serve as sanctions for the leadership of the Peoples Democratic Party, PDP, to reverse their decision for an open presidential contest to zoning formula, as enshrined in its constitution.

According to the OYC statement, “Historically, Igbos had never remained in the opposition party since 1960. Igbos deserves better deals, and only through active roles in the mainstream political party will there be an increase in dividends of democracy and projects in the Southeast zone”

“The continuous exclusion of the South-East zone from the federal government’s crucial political appointments and landmark projects are attributed to Igbo’s absence in mainstream governance. Igbo youths want these unpleasant situations to end, and OYC urges South-East governors to embrace APC and decamp without further delay” It said.