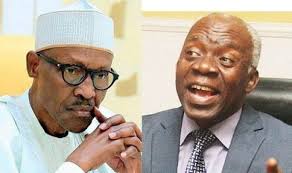 The Chairman of the Alliance for Survival of COVID-19 and Beyond, ASCAB, and Popular human rights lawyer, Femi Falana has cautioned President Muhammadu Buhari not to use the Military against #EndSARS protesters.

Falana also stated that the Chief of Army Staff, Lt Gen Tukur Buratai, risks facing the International Criminal Court, ICC, if any of the protesters happened to be killed.

The Army had said it would commence Operation Crocodile Smile VI Exercise , which is usually conducted annually to checkmate the activities of criminals across the country during the ember months.

It noted that this time, the military operation which would run from October 20 to December 31, would carry out cyber warfare operations to counter negative propaganda by criminal gangs and groups in social media and across the cyberspace.

Falana in a statement issued by ASCAB, however advised President Buhari to withdraw plans, but should instead, engage soldiers for what is a purely democratic issue in the country.

According to the statement, “Protests have commonplace across the world as seen in Hong Kong, US, France, South Africa, Belarus, and even in Sudan”

Falana asserted that it is unfortunate that the Federal government is sending a signal to the military that it has a role to play in a matter that is purely civil.

The human rights lawyer said, “The plan to deploy soldiers is dangerous. It will push Nigeria into the red light district of global reckoning.

“Buhari should not to use soldiers to quell a peaceful, civil protest. The protesters have been lawful. The few cases of violence were associated with armed thugs disrupting the protests coupled with the shooting of protesters by security operatives.

“The political class is isolating Nigerians from governance. State resources are squandered by a few, corrupt people who over the years have failed to address institutional rot that continues to fuel anger and desperation of the toiling people.”

Some CSOs, including Centre for Democracy and Development, CDD, Enough is Enough and Civil Society Legislative Advocacy Centre, CISLAC, have also condemned the military exercise, saying it is unacceptable.

They however alleged that it was designed by the Federal Government to crush the civil protests.

The CSOs unanimously warned that the Exercise Crocodile Smile VI would only serve to exacerbate the distrust of citizens and lack of confidence in the state and its institutions.

So, they urged the military to withdraw the operation and remain in their barracks to defend the territorial integrity of the country until the #EndSARS protests abated.