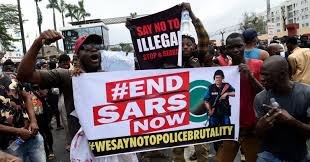 President Muhammadu Buhari has said that his administration recognises the democratic rights of the Nigerian youth to peaceful protests, urging them to beware of anarchists, who may hijack their gatherings for selfish motives.

The president stated this when he granted audience to the Minister of Youth and Sports Development, Mr Sunday Dare, at the State House, Abuja, on Monday.

Dare, who briefed State House correspondents at the end of the meeting quoted Buhari to have advised the youths to always be on the alert so that miscreants would not take advantage of their genuine intention.

“Firstly he said, he recognizes their democratic rights to protest.

“Secondly, he made an appeal that this protest wherever held, should be done in a peaceful manner.

“And thirdly, he said the Nigerian youth should be on their guard to make sure that elements that would infiltrate and distract them from the very purpose of their protest should be prevented from doing so,’’ he said.

The minister, who disclosed that he updated the president on developments concerning EndSARS demonstrations by youth across the country, said the president assured the youth that their five-point demands would be implemented.

According to him, plans are on to implement long lasting reforms that will give birth to a new Police Force that the country will be proud of.

He said: “The President assured me that the demands of the protesters are being met in a timely fashion, some have been met already and the process to meet others is on.

“So, he says he has accepted their demands and government is already responding at various levels.

“The president said the youth of this country have spoken, he has heard and he has since gone to work for the youth of our country; not only as a President but as a father.

“Indeed, he said, he is a father to this generation of our youth and his desire is to see that they are well protected, that they live in a country where they enjoy their freedoms and they do not suffer from any form of Police brutality.

The minister said the president acknowledged that Nigerian youth are a great resource to the nation, adding that government has heard their cry and government would ensure that all their demands are met.

The minister also quoted the president to have said that the youth of the country would be celebrated by government at all levels, “for their vast potentials and skills, since the future of Nigeria lies in their hands.’’

Dare also appealed to the youth to end their protests and give room for government to address their demands.