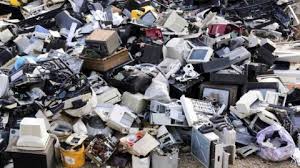 Jauro said this while delivering a speech to commemorate International Day for E-waste, organised by the agency in collaboration with E- waste Producer Responsibility Organisation Nigeria, EPRON on Wednesday in Abuja.

He said that the effort would create job opportunities, improve development, as well as reduce poverty in the country.

According to Jauro, the substances contained in the electronic devices can also have a negative impact on the environment.

“Although some chemicals present in electronic components are hazardous, many have economic value.

“This makes e-waste a tradable commodity and a source for job creation and poverty reduction in the country.

“E-waste poses a serious hazard to human health and the environment when dumped in landfills or improperly recycled,’’ he said.

Jauro said that the agency was planning to sensitise Nigerians on possible ways in collecting E-waste, by educating people on the need for them to imbibe the best method of collection of the waste.

The director-general said that the agency has commenced the implementation of Extended Producer Responsibility, EPR programme.

He said that the EPR was a framework of action for a collaborative and partnership approach between government, business and the larger society towards achieving a zero waste society in the near future.

Jauro said that the objective of the EPR programme is to ensure a decrease in the total environmental impact from a product including its packaging.

He said that the programme will be implemented by making the producers of the product responsible for the entire life cycle of the product, in particular, the take-back, recycling and final disposal of the product and its packaging.

“The primary responsibility of EPR lies with the producer, who makes designs and marketing decisions,” Jauro said.

He said that the agency was also planning to launch the Emission Control Progrmme, adding that the programme was aimed at cleansing and sanitizing the environment.

Jauro said that the purpose of the agency involving the students to mark the international E-waste Day is to educate the children on the importance of E-waste and how they can handle it at their various schools and homes.

E-waste Producer Responsibility Organisation Nigeria, EPRON is a non profit organisation set up by electrical and electronic producers in Nigeria.

It is the first Producer Responsibility Organisation, PRO for electronic waste in Nigeria.