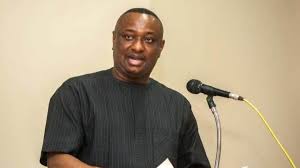 The Federal Government has rescheduled the commencement of the Public Works programme.

According to the Minister of State for Labour and Employment, Festus Keyamo, SAN, President Muhammadu Buhari has approved the rescheduling of the programme from 1st October to 1st November 2020.

The programme is meant to engage 1000 persons from all the 774 Local Government Areas, LGAs in the country for menial jobs for three months.

Keyamo said the approval was based on his memo to the President informing him that most of the proposed project sites were still water-logged as the rains had not abated.

The programme, he noted, was designed for execution during the dry season when most of the project sites would be ready for work.

He said that capturing of those to be engaged by the selected banks has been progressing seamlessly across the 774 local government areas.

The Minister pointed out that information regarding the banks attached to the specific local government areas could be found in the project’s website: www.specificpublicworks.gov.ng.