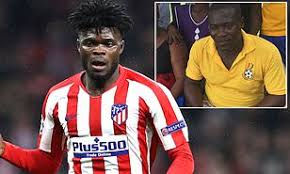 Thomas Partey’s father has explained that his superstar son waited for “bigger team” amid Chelsea and Juventus interest.

The Ghana international was the Gunners’ priority target all through the transfer window, and he eventually completed a £45million move to Arsenal from Atletico Madrid on deadline day after many months of speculation.

The midfielder’s father, Jacob Partey, has now revealed that the midfielder was of interest to the Serie A champions and Chelsea.

He told My Joy Online’; “We actually weren’t disturbed by anything because we hoped a bigger team will come for Partey.

“We were aware of the [other teams that were interested]: Juventus, Chelsea and so forth. So, through all of this we knew God was with us. From that minute we started to dance to ‘Party after Party’.

The 27-year-old is set for a big role in North London, and his father was quick to dish out words of advice for the tough-tackling midfielder.

“My advice to him was irrespective of the big move, he has to keep training seriously and not lose focus, not chase ladies, so he doesn’t flop! He was very receptive of that.”

Partey is in line to make his debut against Manchester City at the weekend.