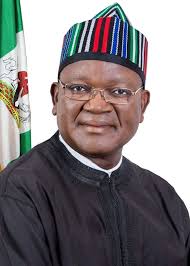 The Benue state Governor, Mr. Samuel Ortom on Sunday condoled with the families of those who lost their lives in a motor accident on Saturday at Gbatse Village in Ushongo Local Government Area of the state.

This was contained in a press statement, signed by his Chief Press Secretary, CPS, Mr. Terver Akase, and made available to newsmen in Makurdi.

Ortom also sympathized with the management, staff, and students of the University of Mkar, Mkar, who lost two of their lecturers, Joseph Leva and Moses Tarnongo, in the accident.

Tarnongo died alongside his wife and three children , making a total of seven persons killed in the accident.

Ortom described the incident as devastating and urged the relevant agencies to investigate the unfortunate development.

He prayed to God for the repose of the souls of the departed and consoled the bereaved families to look onto God for strength to bear the pains.