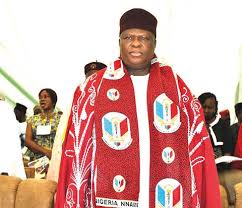 The NCPC boss congratulates the Royal Father for adding another year in his life and for good health of mind and body which the Lord has granted him.

He explains that as the Chairman of the Plateau State Council of Chiefs and Emirs, he has been able to uplift the image and respect of the traditional institution in Plateau State.

He particularly appreciates His Royal Father for his humility and sense of wisdom in piloting the affairs of the Plateau State Traditional Institutions.

Rev. Pam affirms that Da Gyang Buba is a pride to Plateau and Nigeria as a whole, adding that he is a detribalised Nigerian who believes in the Unity of this Nation.

He urges him to continue in his peace building role of uniting the entire good people of Plateau State.

Rev Pam prays that the Good Lord will continue to grant his Royal Father long life and prosperity.